A little more than a minute update: The Wounaan

“We would go on long hikes in the jungle and go camping. Sometimes we’d fish or hunt some kind of animal or just investigate the new things that were there that we hadn’t seen…”

This morning we had our friend, Ezequiel, over for breakfast. He was telling us all about his childhood growing up in the jungles of Panama. He’s from the Wounaan tribal group and thanks to missionary efforts many years ago he came to know Christ as his Savior and is now in training with New Tribes Mission to become a missionary to his own people. It was exciting listening to him talk about his childhood and his people group. Stories of spear fishing giant fish that dragged him under, finding giant ships from the Spaniards in the middle of the jungle and wondering how they got there, killing giant boa constrictors to help protect their small livestock and children, adventuring far from home with his machete at 7 or 8, camping, hunting, hearing ancestral legends, and learning to recognise the strange sounds of the jungle birds and to fear what would be ahead when all the sounds went quiet. Such a different childhood and value system than many of us were raised with. As he talked you could see that he wasn’t jealous of the experiences other kids have with unlimited electricity, access to the internet, TV, and videogames. While we sat and listened to him you could see the nostalgia on his face. You could see how much he missed his home and adventuring in the jungle. He’s excited to go back to them after finishing the missionary training.  He explained how the Spanish missionaries who came to them more than 70 years ago were able to lead many to the Lord, but because their existing animistic belief system was not displaced so many years ago, the Truth of the Word has been re-distorted and mixed in with their origin stories to create new beliefs. Ezequiel is the ideal person to go back to his own people because the Wounaan do not allow outsiders to observe or attend their ceremonies. No gringo missionary would be able to truly learn and understand their current belief system to be able to teach them at a worldview level. We were so excited to hear how the Lord has worked in his life to bring him back to his own people. We pray that someday the Wounaan will have the scripture translated well into their own language, so that they will have the truth in a permanent form, so that it they will have the Word in their hands and it will no longer be able to be warped over the years, like a game of telephone. 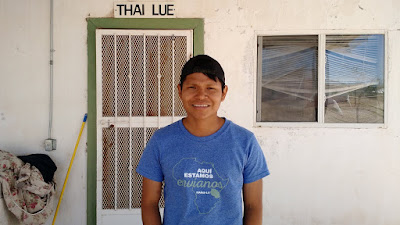 It’s been exciting for us to see how God has been using people from all over the world to reach people all over the world. Our own coworkers Vicente and Erendira are from indigenous people groups here in Mexico. They were saved through missionary efforts here and are now involved in reaching Vicente’s own people group, the Guarijío. We’re excited to be working with them and we’re very excited to move in and get started with them in ministry.

Chrissy is working very hard on her Spanish studies, and I’ve been taking care of as much as I can with the house and the kiddos. She has a language evaluation in May and if she passes we’re hoping to spend a few months on a short furlough to visit churches, supporters, family, and friends, before moving into the tribe. Right now our tentative plans put us moving sometime in November, but that all depends on factors like Chrissy’s Spanish, furlough plans, and even weather.

Please pray that I’d be able to take as much off of Chrissy’s plate as possible to allow her to focus on her studies of Spanish and Mexican culture. Pray that she’d be able to focus and work hard for the next few months the way a runner sprints to the finish line. Pray that we’ll be able to plan well and have a good furlough time and a smooth transition into the tribe.
Email Post