"It looks like your water has broken" the doctor said the morning of January 17th. I had been experiencing mild contractions since the night before, but was not sure my water had fully broken. He sent us across the street to the hospital to check in. He said he would be over to check on us in a few hours. It was finally happening!! We called our families before going in to tell them the news. We were so excited we would finally get to meet our little girl.

Contractions intensified, but overall things progressed pretty slowly. We had hoped to be able to walk around the hospital to get things moving faster, but Lily's heart rate was abnormally high, which meant I had to stay in bed to be monitored consistently. They thought her heart rate was high because I was running a low fever.. but we weren't sure what was causing that. It stayed high all day, except for a few minutes when after I took some tylenol. I was progressing so slowly that the doctor put me on some medication to increase the contractions. They immediately became more intense and more regular, but Lily was not a fan of the meds. So they took me off them. The contractions continued to intensify over the next several hours, and I began progressing faster. I have never been in so much pain. Every part of me ached, and it seemed like it would never end. 18 hours after my water had broken I got up to use the bathroom. When I got back in bed they hooked me up to the fetal monitor again and could not locate Lily's heart beat. I saw a look in the nurses eye of concern as she moved the monitor around. Finally she found it... reading down at about 60 bpm and slowly climbing back up. A nurse ran into the room and asked "What was that?". I could tell she was trying not to scare me, but obviously something was up. Her heart rate climbed all the way back up to the abnormally high range and the doctor came in. He said we needed to talk about a c-section because she was showing pretty clear signs of stress. None of this was the birth I had hoped and planned for. The natural, no interventions birth I had wanted had turned into IV's, fetal monitoring, antibiotics, pitocin and now a c-section. I did not care. I had a doctor that I trusted and all I cared about was Lily's safety. The doc said that in the next half hour people would be coming in to talk to me about the c-section and hook me up to different things.  10 minutes later they were running my bed down the hall and telling Don he couldn't come into the room with me until they knew if they had enough time to give me the epidural or if they would just knock me out. Her heart rate had dropped again, and we needed to move fast. I have never been so scared.  I was praying and praying and praying she would be alright. They monitored her heart and decided they had enough time to do the epidural. Don was finally allowed in to be with me. I know the whole experience was traumatic for him. It was just like a scene from a movie. I was so glad to have him by my side. 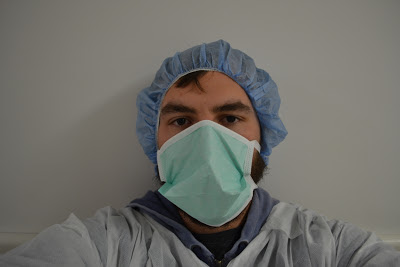 All the doctors and nurses were so nice, I think they knew how scared I was. They were all talking to me, trying to take my mind off the situation.. but of course that didn't work. I had iv's and cords and monitors attached to every limb.. it was a very weird experience. I was scared as I lay there waiting for them to make the incision.. when all of a sudden I heard them say "There she is! Wow, she has such chubby cheeks! She's beautiful!" and then I heard her cry. I felt so helpless laying there, I couldn't even lift my head to see her. But I was so relieved she was okay. The doctor lifted her up so I could see her, but I couldn't really get a good look. I just lay there sobbing. Don's face was all I could see and he was so happy. :) After that Don left with Lily and some nurses to get her cleaned up, while I got stitched back up. An hour later I finally got to reunite with the one who had been inside my tummy for the last 40 weeks. She did have chubby cheeks! And she was absolutely beautiful. And she was perfectly healthy too. 8 pounds 6oz and 20 1/4" long.   Amazing. 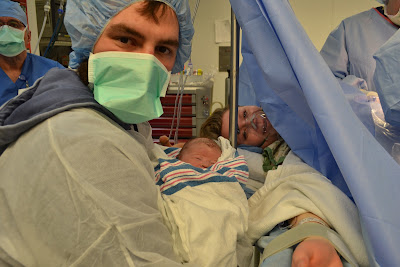 Even though it was not the birth I had planned, I don't find myself discouraged at all about it. I am SO incredibly grateful for well trained doctors and nurses and the technology that we have these days.  I am SO glad that they moved as fast as they did and were able to get her out safe and sound. I thank the Lord for a healthy and beautiful daughter. 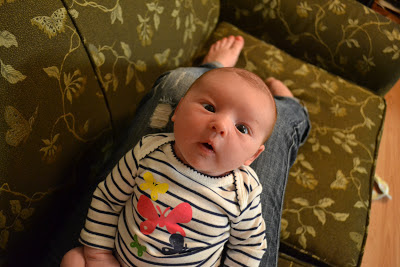 She is two weeks old today! And she is such a good baby. She is very content, she sleeps well, eats well, and her crying is always short lived. She has already gained over a pound and grown an inch. I'm thankful for such an easy baby, because this semester is going to be tough on both of us. Don's linguistic classes began the day before Lily was born. He had to miss the first two classes (thankfully they were only introductory things) and since he has been back in class he has had 5 or more hours of homework every day.  This means he is going, going, going all day long and has not had a lot of time to be with his daughter most days. He is pretty tired from it, and I am too. They say the first three weeks of Linguistics are the hardest, so hopefully things will settle down a bit more after next week. But please pray for us if you think of it, that we will keep our sanity and be able to spend some down time together as a family.  Also that I won't go too stir crazy being at home so much.  :) 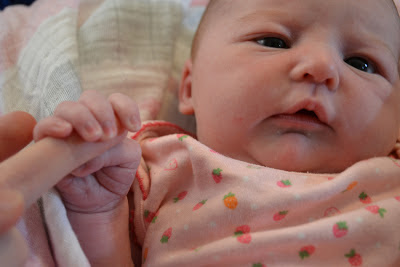