We survived!!  We just finished up two weeks of a class called Practical Skills here at the training center. For two weeks we went without internet (except for homework purposes), plugged in electronics, use of our car, and lights after 8pm. We also were limited to cooking only from scratch (although we were allowed the use of our refrigerator and stove/oven).

A few other challenges thrown our way were 24 hours without water. This was to mimic the potential dry seasons we might face overseas. For those 24 hours we had to haul water from a nearby wash house building to flush our toilets, do our dishes, etc..

We also had three days of "rainy season" where we had to live as if our solar panels were not getting enough sunlight and therefore we had no electricity at all. So instead of lights out after 8pm, it was lights out for three days. Again, we were allowed to use our fridge, but had to designate one person as the refrigerator opener, to conserve energy.

It was good practice but also harder than we thought it would be! We did fine without those things for the two weeks, but the hard part for both of us was remembering not to turn on a light switch or flush the toilet when it is such a reflex to do so. We actually both enjoyed not having technology such as laptops and iPods and phones for two weeks. We spent a lot of time together and hanging out with other people. It was great!!

The hardest part, but also probably the most interesting was the last three days. From Thursday at noon until Sunday at noon we camped out in the woods with about half of our class.  It was supposed to be one of the coldest weekends yet this year and we had to backpack almost all of our supplies out there with us. Instead of packing a tent, we had to build our own shelters using tarps, rope and tree's/sticks. We did all our cooking over a fire and during the days had several 'classes' on different survival necessities. We had one class on different methods of starting fires, another on using chainsaws, one on pumping water and another on killing and preparing chickens to eat. It turned out to be a pretty fun weekend, but the nights were definitely cold (even though Don built us a wonderful shelter) and we were very stinky by the end of it.

We are glad to be back home now! Here is a picture of Don and our friend Tyler passing some time by whittling a chess set. :) 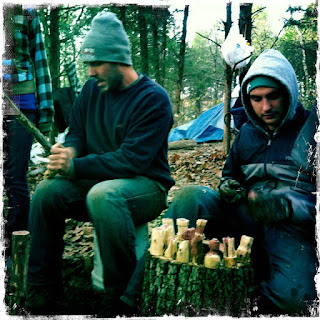