Please be praying for the Akolet people of Papua New Guinea, with literally just three days left until the Akolet people hear of the death, burial and resurrection of Christ, the missionaries are reporting many people already coming to faith in Christ! Read more below from a recent update from the team...
Here is an aerial shot of the area/islands where the Akolet live. 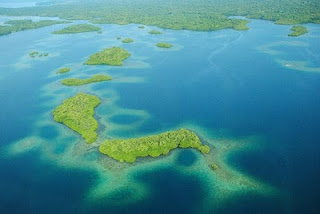 5 families live here on our island with us. Of those 10 adults, Gili, Lonsi and Samam have already responded to the Gospel because of the work they've been helping us with in preparation for the teaching.
The remaining 7 adults have all been extremely attentive each day during the lessons, asking lots of questions, waiting on pins and needles for how God was going to make a way for them to be made right with him! (Andrew Gelio and wife Petrolina Namaik, Toni and wife Jacklyn Amos, Lukas and wife Febiana Watlo, and Gili's wife Bernadette Waklo.)
Waiting for God's way of salvation or not, they're still unsaved and frequently act like it. Yesterday morning, things had come very much to a head in 2 situations. Gelio had beat his wife Namaik, and Toni had also beat his wife Amos the night before . There was a great deal of angst and unsettled-ness down the hill as they all tried to deal
with the fallout of these difficult situations. (Unfortunately wife beating
is very common.)
When domestic disturbances happen like this, culturally one of the spouses will often "disappear" for several days or longer until things cool back down. We were concerned that with only 9 more days of teaching to go, this could be a situation that Satan might use to cause some or many of these friends of ours to quit coming and listening to the teaching, and actually miss HOW Jesus is going to deliver them!
We prayed about it with our co-workers the Warners, and decided that on Thursday, we would cancel all our other work after the lesson had already been taught in the village, and gather all the adults together on our island and share the Gospel message with them.
Each and every one of them responded with a clear testimony of faith in Christ. Praise the Lord! Gelio, all hyperactivity and intensity, actually cried (Akolet men do NOT cry!). Toni and Lukas are both quiet guys by nature, and this was reflected in their response as well. (Toni was actually not there during the meeting, so Adam caught him up the next morning and he responded in faith!)
The women were uncharacteristically quiet and somber during the lesson, but at the point where Adam explained why Jesus' death completely paid for her sin, a huge grin lit up her face. Waklo and Amos, mother and daughter, both are quiet women. But they both said, "There's no other way! It's only belief in Jesus' death! We can't do anything to add to that - he didn't 'half' his work - He finished it and said, 'It's all done!' when he died!" Namaik, with a complete deadpan expression which belied her excitement said, "I'm so happy that God has saved me!"
The whole group was completely mesmerized by the tearing of the temple curtain from top to bottom. They knew all about the tabernacle and temple and the articles in it from our previous lessons, and they knew how the curtain symbolized the separation between holy God and sinful man. Last night (after these new truths had ruminated in their hearts for over a day) the whole group was STILL talking about that curtain and how it shows that we can now be made right with God - all because of Christ's death!
We are overflowing with joy. But it doesn't stop there -
Liwa, another woman came to see me yesterday afternoon. She had this big smile on her face and said, "I've come just to tell you that I've realized I'm a sinner and that Jesus is the only way to be made right with God." I was stunned - so I took her inside
and explained the rest of the death, burial and resurrection to her. She understood and said with great joy: "I'm not in Satan's fence anymore! Jesus took me and put me in his fence! I am a sinner, but He rescued me!"
She promptly left my house, went down the hill, and told the other believing women on this island. She put flowers in her hair and they danced (so I was told later - how disappointed we were to not see it for ourselves!)
That was Friday. But again, it doesn't stop there. Saturday, Lipi (teenage son of Lonsi and Samam) came up for his weekly "typing tutor". (He graduated from the literacy class and he's now learning how to type.) Afterwards he stood there in his awkward-quiet-teenage-boy way, and said, "Did you want to talk to me about something?" I was like, "Um......what do you mean?" He said, "My parents said you and Adam would maybe want to talk to me." So Adam went down and asked him what was up. What came next you would never believe came from a 15 year old guy's mouth.
Here is what he said, "Man - this Bible teaching is so good and it's the truth! It has really shot my stomach (convicted me). I am a SINNER! But God said he would provide a Rescuer, and I know that Rescuer is Jesus! So I'm waiting for him to rescue me!" Adam said, "Would you like to know how he's going to do this?" Lipi said, "Yes!" So in a few minutes, he too understood the simple message of salvation and responded in faith

So exciting! Please be praying for the team and the Akolet people these next few days!
Email Post